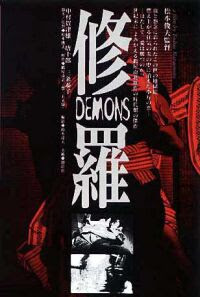 aka DEMONS aka PANDEMONIUM

Gengobe Satsuma, an exiled samurai cast out as an Asano clan retainer is given a second chance to join his brothers in arms to become the 48th Ronin against the Shogunate. His faithful servant gathers the 100 ryo required for his acceptance. Gengobe is also in love with a greedy geisha named Koman. About to be sold to another man, Gengobe learns that for him to keep her, her debt is exactly 100 ryo. 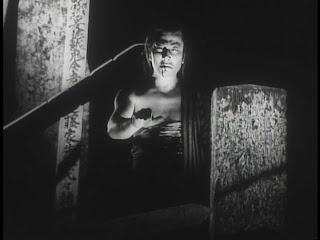 Matsumoto Toshio's seldom discussed haunting and horrific Jidai Geki is an alternate take on the famous Japanese true story of the '47 Ronin' and their plight to avenge the death of the ritual suicide of their leader, Asano Takumi. Beautifully shot in stark B/W, Matsumoto's vision of a decrepit world filled with unscrupulous, weak minded individuals is simply one of the most brutal motion pictures ever made. The violence, although infrequent, is strong and escalates in the extreme by the end which resulted in the picture being banned in some territories. 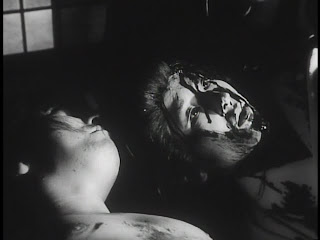 Possessing but a single shot in color, this brief moment of the sun descending foreshadows the darkness ahead and as the film progresses, the surroundings appear to get darker and darker as the picture gets closer to its conclusion. Tatsuo Suzuki's cinematography deserves the utmost praise in capturing one of the gloomiest, most depressing visual palette's ever conceived. The film is shot in such a way, that the viewer is sometimes placed inside the head of Gengobe--we live the many deceptions, lies and utter carelessness he endures, or brings about onto himself. We share in his continued downward spiral into the blackness of hell's pit, but we can only watch as he descends further into madness, brought on by his blind love for a woman and his forsaking of duty. 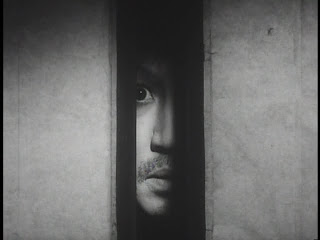 Another gloomy attribute is that no one individual survives unscathed--guilty or not. After introducing several characters seemingly bereft of any and all humanistic traits whatsoever, Matsumoto pulls the rug out from under us. The director strangles his audience with a breathless irony that sweeps the viewer into a pestilent portrait of despair even more hopeless than the previous brushstroke of black morbidity. This surrealist nightmare shall remain embedded in your brain some time after total darkness has embraced the final shot of the film.
Posted by venoms5 at 20:55