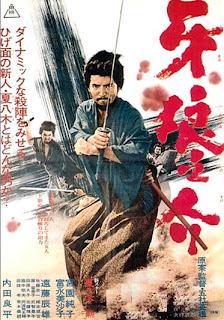 A destitute ronin bearing the name of Kiba Okaminosuke wanders into a tiny, impoverished hamlet run by Ochise, a blind woman who owns a troubled messenger service--a business whose profits barely keep the meager town going. Delivering the corpses of two of her escorts he found on the road, Ochise explains her dire and desperate situation to the wandering samurai. Not long after, a duplicitous and conniving businessman named Nizaemon comes to Ochise with a new job to deliver 30,000 ryo to the magistrate's office in Imagawa. Nizaemon has designs on Ochise's business and this new plot leads him one step closer to crushing the staunch blind woman. Kiba agrees to help her with this enormous task. But Nizaemon isn't the only obstacle in the way as Akizuki Sanai, a formidable swordsman and a guileful brothel madam have plans of their own.

Hideo Gosha is considered one of the unsung greats of Chambara cinema. The director made a big splash on the industry with his seminal classic THREE OUTLAW SAMURAI (1964), a movie that was later redressed by the revered Hong Kong movie maverick, Chang Cheh as THE MAGNIFICENT TRIO in 1966. This was Gosha's fourth movie as a director and the breakout role for lead Isao Natsuyagi who was also featured in the original 13 ASSASSINS from 1963 as well as many other classics for Gosha, Kinji Fukasaku and other directors.

The character of Kiba is far removed from the silent, brooding and brutally intimidating sword wielding wanderers that dominated later samurai cinema. He's of the ZATOICHI school of a kindly, carefree soul who, unlike Katsu's blind masseur, has no job and no money. Essentially a beggar, Kiba is nonetheless steadfastly honest and about as noble as you can possibly get. During the opening credits, Kiba joyously stuffs his gut and as the kindly old lady figures up his bill, he relays to her that his pockets were as empty as his stomach prior to filling the latter. As payment he offers to chop wood and fix her dilapidated roof, much to the approval of the elder woman. The film is also peppered with light comedic touches such as a scene where the blind girl speaks of the sensitivity of her other senses allowing her to smell his presence to which Kiba agrees noting it's been a year since he last had a bath.

Another example of Kiba's honorable intentions occurs at the end during the concluding duel with Akizuki Sanai. Noticing his opponent's injured arm, Kiba decides to tie back his left hand to make the battle a fair fight. This action isn't something you'd normally see and character traits such as this are what make Okaminosuke Kiba such an endearing character. Sadly, there would only be two tales of the SAMURAI WOLF, the sequel also being directed by Gosha.

The B/W photography yields some beautifully crafted shots, although fans of LONE WOLF styled arterial fountains will have to deal with the numerous blood sprays in the monochromatic format. Another nice touch is the addition of slow motion and some scenes playing silently save for the sound of clashing swords, or cries of pain. Also, as per many Chambara movies, there's a gaggle of villains thrown at Kiba including a deaf mute killer with a literal monkey on his back, a trio of silent samurai slicers and the less comic book character of Akizuki Sanai, who gets quite a bit of interplay.

SAMURAI WOLF is a delicious cold cut samurai sandwich that adheres to standard Chambara conventions, but creates a vastly likable hero in the process. Although the plot seems typical formula fare, there's some nice twists that are revealed along the way. The music by Toshiaki Tsushima is a curious blend of harmonica, french horn, piano and traditional Japanese instrumentation and these elements are almost always mixed together to formulate a fascinating musical resonance. The films trailer is also of great interest in that virtually every shot is made up of alternate takes and footage not in the finished film. This being a Toei production, fans will recognize many a familiar face populating the cast here. Gosha also helmed these well known and unjustly obscure classics--GOYOKIN (1969), TENCHU (1969), BANDIT VS. SAMURAI SQUADRON (1978) and HUNTER IN THE DARK (1979). Gosha also took aim with modern day crime epics such as CASH CALLS HELL (1966) and THE WOLVES (1971). His work is ripe for discovery and wider recognition in an arena almost exclusively dominated by Akira Kurosawa.